After yet another lapse, I’m giving it another try. The schedule never came together in April, and completely fell apart when the whole house came down with the flu, out of town guests, and a couple medical procedures thrown in for good measure.

So here I am, 2 months later. In summary:
– I need a lot more practice making lids, and using my new calipers. Even with them, I managed to make lids that were a bit too small. They fit, but are sloppy/loose in the gallery. At least they don’t fall through!
– I’ve somehow made it on to a list of ’50 Inspiring Pottery Blogs’ — I haven’t been feeling very inspiring or inspired lately, but it’s a great goal to shoot for!
– I have about a million ideas that I’ve collected in my brain in my off-time, and I need to organize, edit, reduce, and make a plan for trying them out.

What’s that you say?
Well, I’ve taken the liberty of modifying the acronym BICHOK that some writers use – Butt In Chair, Hands On Keyboard – or sometimes simply ‘BIC’ to something more alligned to my goals, thus:

Butt In Studio, Hands On Clay.

This Saturday night, March 27, from 8:30-9:30PM local time -wherever you are- is International Earth Hour. Show your support for climate issues by flipping off your lights for one hour.

Last year nearly a billion people participated from 4100 cities and 87 countries, including 80 million Americans in 318 cities. Also many cities corporations and organizations showed their support by going dark for an hour, including

Learn more here: www.my earthhour.org
Join us in turning off your lights for one hour, and spread the word!

This week I’m going to talk about the non-English speaking parts of the world. Do you have any foreign readers? For example, this blog as seen visitors from 67 countries since beginning in August 2008. The top 10 languages being English, Portuguese, Italian, French, Czech, German, Dutch, Spanish, Polish, and Turkish. Among the most pages viewed per visit, then top languages are (surprisingly), Norwegian, Korean, Danish, Portuguese, Turkish, French, Japanese, and Finnish. English makes it’s appearance down at #20.

Or maybe there’s a blog that you want to read that’s written in French? I’ll show you how to do that also.

It didn’t occur to me right away that people in other countries might find this blog worth it to read. I didn’t even know how many English speaker would. But soon after starting out, I began to see an occasional visitor from a far off country. I began to wonder if they knew English, or were translating me somehow. I thought that if they were finding my blog, the least I could do was make it easier for them to read.  Maybe you’ve noticed I have a Google Translate button prominently at the top of the right column. This will translate all the text on the page into whatever language you’d like to see it in. Go ahead, play with it for a minute, I’ll wait….

Pretty cool, right?
To add a Google Translate widget to your blog, go to your Blogger [Layout] tab, and click on Add Gadget.
Select the HTML/JavaScript gadget. Then paste this script into the code section: 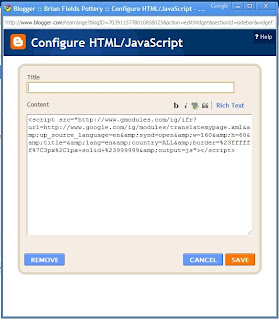 Then click [Save] and you're all set.
Now anyone who doesn't speak English (or actually whatever language you write your blog in) can translate your blog when they land on it.
So what if there's a really cool pottery blog in French that you'd like to read?  Well, if you're using Google Reader, it's a snap. (If you're not, see my post on using Google Reader here) Remember in that previous Tech Tuesday how I showed you how to subscribe to blogs? Just a simple extra step will have you reading foreign blogs.
With the feed selected, go to the [Feed Settings] button, and just click on [Translate to my language]

and, as the French say, Voila'

English!
One big way I find other pottery blogs is by checking out the blogrolls of blogs I already read. So once you find a few non-English blogs, a whole other world opens up. The world of pottery (and other) blogs just got a lot bigger!
And for everyone in other countries reading in your native language, welcome! and thank you for reading! If you have or know of a pottery blog in your language, I'd love to hear about it.
Last week I talked about FeedBurner, a way to track how many people are subscribed to your blog feed. Along the way, I realized I was following over 200 blogs (I hadn’t really checked in a while).

Clearly, trying to visit that many blogs individually via blogrolls or bookmarks would take forever, and seriously impact my mental health.  I figured out early on that if I wanted to keep track of all the pottery blogs I was finding, I’d have to use a feed reader.

Feed readers can be separate programs you install on your PC, or web applications you access through your web browser. I’ve experimented with feed reader plugins for Firefox, and a social media browser called Flock that has very nice feed reading and management. Ultimately, I’ve settled on using Google’s Reader app.
Since it’s a web app, it’s available wherever there’s access to a web browser – it doesn’t have to be installed on every computer I want to use it on, and that also means that all the history of read posts is there and searchable as well.

Using it is pretty self explanatory, just head over to https://www.google.com/reader/view/ and log in with your google/gmail account.
There are a couple ways to add feed to your Reader. One is to click on the [Add Subscription] button in the upper-left, and type in the URL of the blog you want to add. In most cases, Reader will find the feed and add it.  Or, while visiting a blog, you can click the Subscribe link if one is provided.

Now you have one place to go to find all your blog subscriptions.  You can quickly go through the unread posts using the [Previous] and [Next] buttons. I starting at the ‘bottom’ of the list and using [Previous], which keeps me in chronological order.

You might notice that a blog here or there doesn’t show the entire post, only a few sentences, or sometimes just the post title.  This is because the blog is set to only show a limited feed, presumably to get you to click through to the actual blog. If you’re not putting ads or affiliate links or otherwise monetizing your blog, there really isn’t a reason to do this. Here’s how to turn on ‘full’ feeds and be more ‘feed reader friendly’:

Other platforms will generally have a similar setting somewhere in the control panel. Take a look around.