Just a quick update.
– I’m making steady progress just using what time I can find. Sometimes it’s just 30 min., sometimes more.
– Concentrating on the past few firings in the gas kiln, while beautiful, have reminded me why I had turned to more primitive low-fire techniques.  I need to find time for both.
– I tweaked this site to be more mobile-friendly. I added a mobile theme for anyone coming here via smartphone, iPad, or such.
– I’ve also been working on a corresponding Google+  page. If you haven’t already, head on over there and check it out. I use it more for shorter, quick updates and pics of works in progress. Just click the ‘Google+’ button on the sidebar to get there.

I read about Meagan Chaney’s 30 Minute Challenge today and thought I’d give it a go. I normally don’t have a lot of studio time after work anyway, so I thought I’d find out what I can really get done in just 30 minutes.

Not counting setup and teardown/cleanup, I made 3 small guinomi / tea / wine / saki cups, and one large 11″ bowl.

What I learned was:
1) Loafer’s Glory is a little less forgiving than Little Loafers. I clearly need more practice time with this new body.

2) Doing a time challenge with a new clay body you’re not used to is clearly a bad idea.

3) Even with the difficulties, I was happy with what I got done, and had a lot of fun too!

It’s been a good summer. Except for a couple weeks when the schedule just wouldn’t allow it, I’ve been able to get my ‘butt in studio’ and keep my schedule.  It feels good to make a schedule and keep it. It’s taken a while, but the skills and speed are slowly returning. Not that I’m a fast, production potter anyway, but man was I SLOW when I first started back!

Blogging regularly, however, has been more of a challenge.  I’ve been working on some things behind the scenes, but my posting has suffered for it.

One of my next projects is to put together a photo setup so I can get some new photos of my work posted and out there. 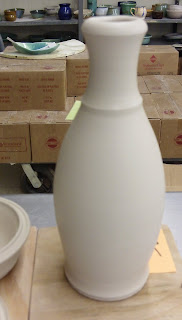 I finally made it back to the studio this week.  I’ve had a few false starts over the months, but I’m hopeful this time it will stick.

Truth be told, I’ve been more than a little nerved out, basically starting over after so long away. But the art center is a great place, with great people, and all that crap in my head soon melted away.

One of my friends saw me there and welcomed me back. I told him I wasn’t sure what I’d accomplish, but I had to start somewhere. He said, ‘ahh, don’t worry about it, it’s just like riding a bicycle.’ I said I just didn’t want to fall off and skin my knee!

I started with 2 one pound bowl/dishes that have a domed lid.  I wanted to make some forms for tests I want to do with the terra sig fermenting in the garage….(gotta go deal with that this weekend). I’m wanting to try something ‘different’ (is there such a thing?) and want to minimize the risk to other work in the kiln, hence the lid/cover. I figure theres only about a 2% chance of something bad happening, but I don’t want my work to end up on the ‘Wall of Shame’ and be branded one of ‘those people’.

I still had some time, so I made the jump to 4lbs. I tried a tall bottle form, and it wasn’t half bad. My clay was ok, but a bit stiff, so it wasn’t pulling up very easily. Probably a pound carved off in my fingers trying to get it to raise.  Whatever.  I’ll get new clay soon, but this is good enough for now. I want to use up the rest of the bag and it won’t take long. You can see an aforementioned wall of shame piece sitting in the background, welded to the kiln shelf with glaze when the bottom cracked out and glaze ran under the piece.

What’s that you say?
Well, I’ve taken the liberty of modifying the acronym BICHOK that some writers use – Butt In Chair, Hands On Keyboard – or sometimes simply ‘BIC’ to something more alligned to my goals, thus:

Butt In Studio, Hands On Clay.

In the spirit of New Years, new beginnings and all that, I’ll be making a fresh start here on the blog and in the studio.
After a particularly frustrating 2009, not being able to do what I WANTED to do, or felt I SHOULD be doing or COULD do, I’ll be focusing on what I CAN do. Until my recovery and PT and various other procedures are done with, I can still make work. I may not be as fast as I was, or be able to throw for hours and hours, but I can make work. Pain or not, working with clay helps me stay sane through it all.

Just read a blog post about the temptation to lower your prices when things aren’t selling.
Assuming your prices are set correctly (whatever that is) in the first place, it makes a lot of sense.

Looking around, I sure haven’t noticed many other sectors slashing prices. Sure, there are the department stores that have huge retail markup having 50% of sales, but you can be sure they are not selling below, or anywhere near, cost. If they are, they’re making it up elsewhere (loss leader to get you in the store) or they’re teetering on bankruptcy.

I thought this really fit in with a common theme I’ve been seeing out in the pottery blogosphere about how people are doing in the down economy. The thinking that makes the most sense for me is that, yes, the big expensive pieces might not be selling right now, so you might want to offer smaller, less complicated, time consuming pieces if you don’t already. But offer them in addition to your other pieces, because you just don’t know what will sell on any given day.

Check out Molly Gordon’s blog here:
Why lowering your prices doesn’t work and how to resist the urge

I’ve definitely noticed a theme of simplifying and minimizing in my life the last few months. Partly brought on by the lingering injuries and physical challenges of the auto accident, partly by a deeper urge to de-clutter the mental and psychological blockages that build up over time.

I’ve been away from clay for too long, and I’m coming to the realization that I need to start somewhere.  It’s become clear that I won’t be throwing like I did 6 months ago any time soon, but I need to get back to doing something.  Less clay, smaller forms, less time at the wheel in one stretch. Less expectations, smaller goals, less pressure on myself.  Physical therapy is making small, slow, sometimes imperceptible progress, and I need to be content with the same rate of progress in the studio.

Along these same lines, Leo Babauta has written a companion to his book ‘The Power of Less’ — a free ebook called “THRIVING ON LESS: Simplifying in a Tough Economy“.

I just read a fantastic piece about business cycles and how to look at slowdowns over at Molly Gordon’s blog here:  Seasons of Success

I lke her point about if you spend your energy resisting the slow times in ‘autumn’ you’ll be too spent to enjoy the ‘spring’ when it returns.

It’s been a while.

It was 7 weeks last Friday since the accident put me out of the studio. Countless doctor visits, pills, hot soaks, and ice packs later I’m slowly approaching functional.
I finally made it back to the studio yesterday to see what I could do. I’d signed up for a class that starts this week, and wanted to find out if I could do it, or have to cancel. I’m happy to report that I was able to handle the 25# block of clay, wedge, center and throw a couple 2# ‘test pots’, a bottle and a vase form. Today I’m a bit sore, but no worse than general pottery soreness from not throwing for two months on top of the lingering soreness, if that makes any sense.  I’m hoping the extra activity at this point helps work the knots and cramps out.
It’s also been 3 months for the Brian Fields Pottery blog.
I’ve had nearly 400 unique visitors from 20 countries and 42 states. I have to say, I’m happliy surprized.