The next time you’re having a bad day and a pot or two collapses because you were pushing the envelope a bit too far, just remember these guys… 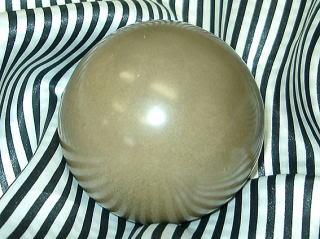 Yesterday I read an interesting article on how to think like Leonardo da Vinci. It really resonated with me and got me thinking about how I could apply it to my pottery.

(I wonder if da Vinci was a potter…. he certainly tried about everything else….. )
I especially liked the points about choosing a theme and observing things in terms of that theme for a day. Also examining your beliefs, seeing if there are any that you haven’t actually verified through experience. Then looking for two or three other possible points of view.
I’ve found in pottery that what works for one person often doesn’t for another, so taking someone’s word for it on what is possible or not isn’t always accurate. I know a lot of people who throw without a sponge. This just doesn’t work for me for whatever reason. Some people throw wet, some throw dry, I kinda fall in between, tending toward dry.
So just don’t forget to keep experimenting!  That’s what makes it fun anyways, and that’s why we do this, right?
The full article is here:
http://www.wikihow.com/Think-Like-Leonardo-Da-Vinci

I read a post over on Deborah Woods’ blog about throwing in cold weather and it got me wondering….

She said she uses a crock pot in cold weather to keep her throwing water warm so her hands don’t freeze, which I actually think is kinda brilliant.

Are there any others out there that use warm/hot water in cold weather? I guess whats bothering me is that I’ve actually tried it a few times, sometimes by accident, pushing the lever more toward warm, sometimes on purpose when it was cold. It took me a while to put it together, but I seemed to have a lot of trouble throwing with warm water. When I mentioned it to a more experienced potter, they said ‘Oh, yeah, you don’t want to throw with warm water, always use cold.’

For you warm water throwers, do you have challenges? Or is it something I’d eventually adjust to? I’d also imagine it’s probably dependent on the clay body.

I’ve got to get back into the studio soon…. WAY too much time to think lately…..

After going over the test results of the experimental pieces I did at the last saggar fire, I learned a few things. Some are probably obvious to those more experienced than I.

For any color at all besides black, some kind of metal salts/oxides are required. I probably should have realized this, but I was hoping perhaps some of the trace minerals in certain organics would be strong enough on their own, trapped under the aluminum foil. They weren’t. Their main function seems to be to influence the colors/shades of any major metals already present. Ferric chloride, copper carbonate, and copper sulfate are all good starting points.

Pieces of broken off pinecones give a nice dark black. If you want good blacks, pinecones and needles are a good bet. It also doesn’t take much, start conservative.

Brushing on ferric chloride works just as well as spraying. And it’s a LOT safer, in my opinion. Airborne ferric chloride is just bad news. You still want to wear plastic gloves and be very careful. It’ll also ruin your brush, so use a cheap one, foam works well. I want to experiment with building up varied layers of diluted FeCl in the future. 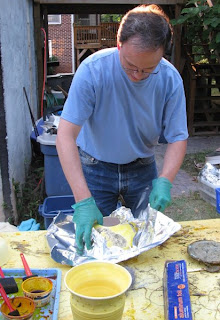 Tinfoil saggars are the way to go, in my opinion. Comparing with other work from clay saggars, and pit firings where some was wrapped in foil the same way and some not, the colors just seem to come out more intense. You can also achieve good results with much less raw material since you don’t have to fill the space between the saggar and the pot. That’s just my personal taste. Some people like more delicate, muted coloration and that’s cool too. And despite reading in several places warning about not firing past the melting point of aluminum (1100F), I’ve never seen or heard of a problem with it. The aluminum foil doesn’t melt, it simply burns away. I think the regular weight stuff works fine, but experiment with some heavy duty and see what you like.

Terra Sig takes the color just as well as burnished or unburnished clay. I thought that maybe since it is a tightly packed surface of smaller platelets it would be less permeable to the smoke and fumes, but it didn’t seem to be a problem. Your clay, however can make a big difference. Earthenware bisqued to cone 06 is much less permeable than a mid/high fire stoneware bisqued to cone 06. The colors are still very nice, but are lighter and more delicate. Again, lots of room to experiment.

More detailed instruction is available in Alternative Kilns and Firing Techniques by Watkins and Wandless. It’s chock full of ideas, many of which can be mixed and matched between the different techniques. This one will really get your imagination flowing.

For more posts about saggar firing, click on the SAGGAR tag below.

Deborah Woods had a good idea regarding my recent clay challenges, thinking it could be the clay hadn’t aged sufficiently yet.
I hadn’t considered the aging factor. But now that I think of it, it could be contributing to the problem. The clay I got was ‘fresh off the truck’, so it hasn’t really aged. However, so is the white stoneware I’ve been using, as well as all the other clay available at the center, so there’s some sort of baseline usability there that the buff clay doesn’t seem to have.

The instructor that used that clay also had multiple bags in various states of age, with trimmings and reclaim constantly being wedged in, so that probably improved things a lot. And as I mentioned, he throws very dry. The first thing I think I’m going to try is cutting way back on the water.

For me, an idea clay would be serviceable ‘off the truck’ and any improvement with age would be a bonus… That probably isn’t very realistic, and it make sense to age your clay, I’m just not in a situation where I can age clay right now.

There are only 2 days left to vote on the poll in the sidebar.

I am interested in finding out how my fellow wheel-throwers prefer to throw. So far, the standers and semi-standers are in the lead.

So go ahead and vote! And feel free to comment here as well, the Blogger tool doesn’t leave much flexibility for freeform ‘Other’ choices.